(NOTE: The following information applies to the General Case Management (GCM) System only)

While eR accommodates information about secondary payers so it can be included on the initial claim to WayStar, any balance billing must be done directly on the claim in WayStar. Changing the Payer to secondary in eR is for tracking purposes only and those claims should not be set to transmit.

What’s the difference between just updating the Primary Payer on the existing Claim vs selecting Submit to Other to create a Secondary Payer claim?

When you update the Payer on an existing claim, it does just that…it updates the old Payer on the claim to the new Payer. You have one claim that now list the new payer as Primary instead.

When you select Submit to Other you are creating a secondary or tertiary claim in addition to the existing Primary claim. The claim to the Primary Payer (either Paid or Rejected) and the new Secondary Payer claim will both be visible on the Financial tab. Depending on how many additional payers a client may have, you could have Primary, Secondary and Tertiary Payer claims related to a single invoice/activity.

Which option is typically most appropriate?

If Balancing Billing a Rejected/Denied Claim ($0 payment) from Primary in WayStar, edit the Claim in eR to bill to new payer as Primary and select do not transmit/print. This will change the claim to the new payer and keep an estimated insurance balance on the invoice until payment is received.

If Balancing Billing a partially Paid claim from Primary in Waystar, apply the payment and use Submit to Other. This will reflect payment from Primary on Client Statement, but it will also assume that Client is responsible for remaining balance until payment from secondary/tertiary is received. (No estimated insurance will be calculated)

Are there any other considerations to determine which action is most appropriate for me?

Yes, if your agency bills client balances for any portion of services. Primary Payer claims calculate an estimated Insurance amount that reduces the balance due for services by the Client until the claim payment or denial is entered. Once the Primary Claim is Paid or Rejected, any remaining balance moves to Client Balance on the Invoice. Creating a secondary or tertiary claim will leave the remaining balance due from the Client until an Insurance payment is applied. If you do collect client balances and want to keep an estimated insurance amount on the Invoice/Client Statement until the very end of the billing cycle, then editing a single claim and updating the “Primary” payer on that claim in eR will achieve that.

Apply partial Payment that marks claim Paid. If manually entering payments follow steps below, if processing an 835 remittance the Submit to Other will be visible on the claim once remittance is posted. 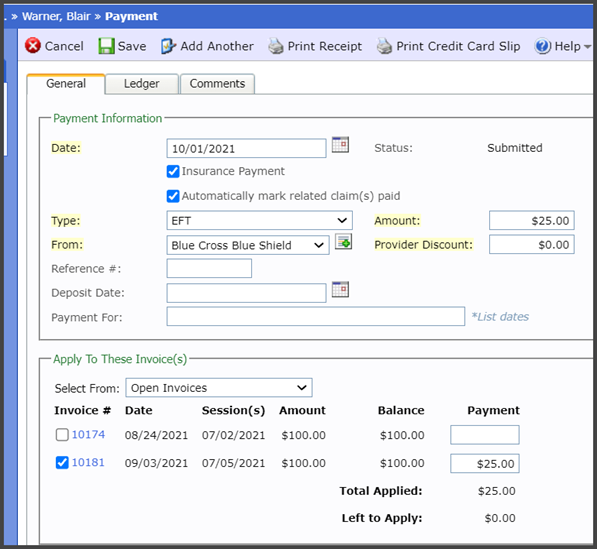 Return to Paid Claim and note the new option available: 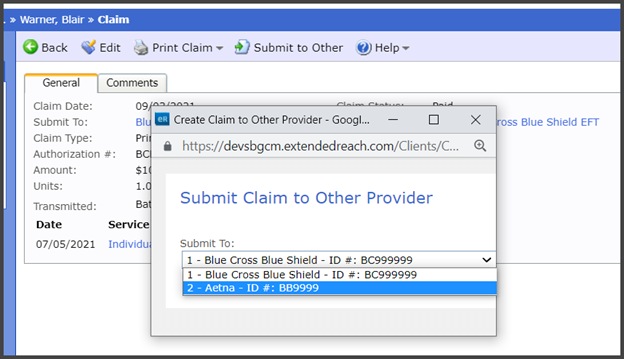 Now you have an open claim for Aetna:

Impact on Client Statement: Indicates the claim is balanced billed (submitted) but expected insurance amounts are only calculated for Primary Claims. May consider not issuing Client Statement until all claims are fully adjudicated. 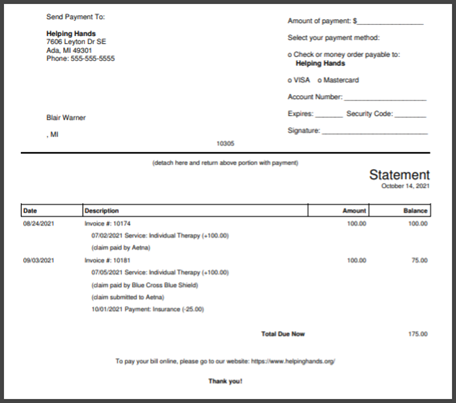